The 2022 season is Matt’s 9th season as the team’s General Manager.

Matt joined the coaching staff for the second half of the 2019 season and will once again help out on the bench for the 2022 season with the defence.

Al joined Guelph for the 2019 campaign, bringing with him more than 35 years of experience coaching lacrosse at all levels, including Major, Senior B, Jr. A, and Jr. B. Before joining the Regals, he was the head coach of the Oakville Buzz Jr. B team in 2016 and 2017 where he had a combined regular season record of 26-13-1. With the Buzz, Al’s teams reached the East Finals (2016) and Semi-Finals (2017) in the post-season.

Peter joined the organization for the 2019 season. Beginning at the age of 5, Pavlinich played Minor Lacrosse in Kitchener before graduating to play 2 years of Junior B in Kitchener and 3 years of Junior A in Elora. After his junior career ended he played Senior with the Fergus Thistles, where he was a member of a pair of teams that won the Presidents’ Cup.

Pavlinich began coaching Minor Lacrosse once his playing career ended and has been doing so for nearly 25 years.

The 2022 season is Charlie 4th as a member of the Regals staff.

Charlie has a long history with the sport of lacrosse, having played Junior in Kitchener before moving on to play Senior in Fergus and Kitchener. Once finished playing, Pavlinich decided to give back to the game as a Coach with Kitchener-Waterloo Minor Lacrosse coaching various age groups.

2020 is Craig’s 2nd season as a goaltending consultant with the club.

Craig has a decorated playing resume himself as a goaltender. In Junior, he played 1 season of Jr. B in London before moving on to play Jr. A in Kitchener-Waterloo and Burlington. He has been playing Sr. B for the Oakville Titans for the past 6 seasons, winning the OLA Sr. B Goaltender of the Year Award in 2016 and 2018 while helping his team to its first-ever Presidents’ Cup appearance in 2018. For the past two seasons, Craig has been playing doing double-time as he has also been a member of the Sr. A Oakville Rock.

In addition to playing Sr. B in the summer, he is also the starting goaltender for the Rochester Knighthawks in the National Lacrosse League (NLL) during the winter months. 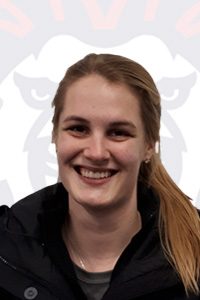 2022 is Stacey’s 5th season as the Athletic Therapist of the Regals.

Stacey graduated with the highest honours from the Honours Bachelor of Applied Health Sciences Athletic Therapy program in 2017. She became a Certified Athletic Therapist in June 2017 and has experience working as a therapist with varsity athletes at Conestoga College. Stacey has had the privilege of working in sports such as lacrosse, football, wrestling, and rugby.